WHAT DOES
UNITE FOR JUSTICE
STAND FOR?
Unite For Justice is a new, national coalition of victims of government crimes and cover-ups, plus supporters for belated justice. We offer many local, state and national organizations our umbrella support, without duplicating what they are already doing.

With 100+ nationally prominent volunteers on our Unite For Justice National Advisory Board, and new ones volunteering weekly, our mission is to strengthen existing organizations, when they write letters or speak to city councils, county supervisors, state legislatures and Congress.

CEO Douglas Millar
CLICK HERE TO READ WHY
UNITE FOR JUSTICE
IS NECESSARY.
**THANK YOU U.S. Attorney General Eric Holder
Current Projects of M'Linda D. Kula,
National Coordinator/Reporter and
NJ State Advocate Leader for
Unite For Justice
Finally a champion has been found in
Douglas Millar of Santa Rosa, CA.
A man of courage and conviction who is currently the voice for abused children around the world!
God Bless you Mr. Douglas Millar and your team. May you continue to walk in faith and
in the light of the Lord!
http://labvirus.wordpress.com/2010/08/28/doug-millars-scheduled-interviews-for-this-week/

*Douglas Millar is the CEO of Unite For Justice.
CRUSADER and HEALTH EXPERT:

Listen to Dr. Ott’s Internet Radio Talk Show
“The Story Behind the Story” 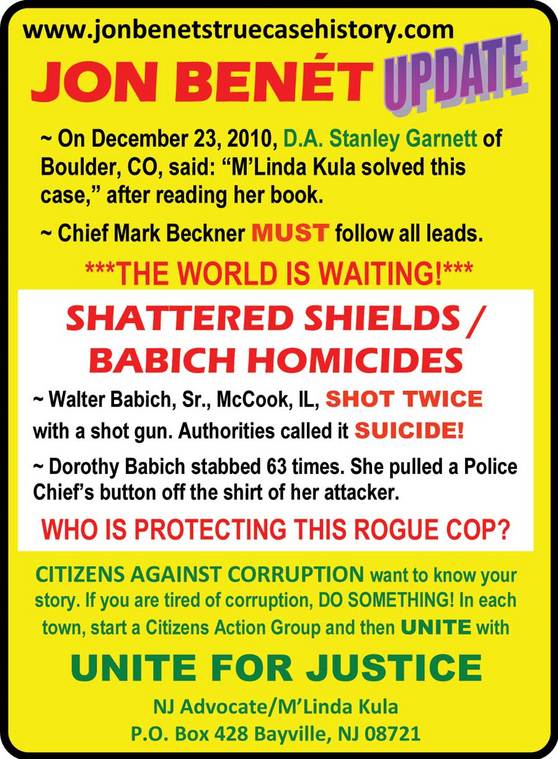 DECEMBER, 2008, Harvey, Illinois: the ENTIRE police department brought down by the FBI.

In order to protect the integrity of the police departments, if you have knowledge of any police engaging in illegal activities:

YOU are responsible for the well-being of the HONORABLE men and women of the police department.
"Global Pedophile Ring Smashed;70,000 pervs involved"
CLICK HERE to see the NYDailyNews.com article which states:

"The investigation, dubbed Operation Rescue, rounded up SUSPECTS including police officers, youth leaders and teachers ranging in age from 17 to 82."

The article concludes with: "Those who have been members of the site can expect a knock on the door in the very near future."
Ocean County NJ is NOT without SIN...

MULTIPLE Meth Labs Protected by Local Police for THREE YEARS and counting throughout all of Ocean County...
~ ~ ~ ~ ~ ~ ~ ~
After conversation with the EPA and the DEP one mother discovered both agencies made it very clear that they are fielding calls on a daily basis throughout all of Ocean County by citizens living next door to meth labs who are unable to get the cooperation of their local police or the Ocean County Prosecutor's Office. Out of sheer frustration these calls wind up with the EPA and the DEP who in turn "send them up the line."
~ ~ ~ ~ ~ ~ ~ ~
A military family contacted multiple police agencies and multiple DEA agencies for assistance with their neighbor who is operating a meth lab out of their home. There are two white candy cane shaped pipes mounted on the roof where the highly toxic fumes are oozing on a daily basis.

In the pursuit of justice and police cooperation in this dangerous situation, multiple individuals of Unite For Justice were able to discover a second meth lab operating less than a mile and a half west of the local police department.  A third meth lab is located two and a half miles east of the local police department. Just recently, a distraught father contacted one of the mothers to point out that there is yet another meth lab between the first and second meth labs. Please understand that there are THREE meth labs within the space of less than half a mile. *If all the citizens do not come together and help us take down these meth labs, you will wind up with every third house being a meth lab. If this small group of mothers can find all these meth labs, WHY can't the authorities?*

Because multiple Unite for Justice Advocates have each reached out to the U.S. Attorney General's office, as well as the local FBI, we are expecting the arrest of the meth lab operators as well as their accomplices, the police who have participated in the coverup and protection of this illegal activity.

We strongly urge an investigation into this police chief's financial information to discover whether or not he is participating in other illegal matters, i.e. multi-million dollar illegal sports betting ring (48 defendants charged with consipiracy to commit money laundering, racketeering, promoting gambling, conspiracy and some charged with conspiracy to distribute controlled dangerous substance) (See the Asbury Park Press, March 29, 2007, and March 30, 2007).

ALL PARENTS SHOULD READ THIS
CLICK HERE FOR STORY

The detective in question recently committed suicide. Our prayers go out to the victims, the children we know of and those we do not know of as of yet.

Three brothers forced to the ground while Lacey Police pillage their home.

Sounds like another case for
Attorney Clifford L. Van Syoc
22 People Charged With Trafficking OXYCODONE Across N.J. (MANY IN OCEAN COUNTY)
ALL PARENTS SHOULD READ THIS...
How close is the enemy of your children? Look in your backyard. Is it your landscaper? Among the arrested were a  Barnegat landscaper and a Little Silver doctor...

Drug dealers ARE... KILLING YOUR CHILDREN!

Keep your head in the sand and you may find a need for this information:

CLICK HERE
What's the Story?
SHOOTING IN SQUAD ROOM!?!
Lacey Township (Forked River) NJ
According to the front page article of the June 9, 2011 Lacey Beacon entitled "Lacey officers identified in incident," By Stephanie Loder and Nicholas Huba, Officer Julie Barcalow suffered a hand injury "after another officers weapon discharged in the squad room of the police department." This same article goes on to state: "Police initially denied any shooting incident had occurred the night of June 2, but issued a statement the next afternoon reporting that a weapon had been discharged following a weapons training exercise and an officer was injured."
Now read the story as reported by the Lacey Patch:
CLICK HERE FOR STORY
So, based on information in the two articles: first there was no shooting incident; then there was a hand injury due to a hand getting stuck in a door; then there was a shooting incident. So the question is: just what is the story? If the Lacey (Forked River) Police can't ACCURATELY report an incident which occurred in their own SQUAD ROOM, then just how accurate are they in the field?
OCEAN COUNTY, NJ:
Stafford Twp. (Manahawkin, NJ)
Years of Police Misconduct

The following information was collected from The SandPaper, Nov. 9, 2005, page 24 in the article entitled "Police Lieutenant Says He Was Snubbed in Choice for Next Chief," by Rick Mellerup.
"Prisoners being forced to strip down, men being handcuffed to lockers with their eyes taped shut and traffic cones taped to their heads, faked court proceedings, cover-ups and retaliation, love affairs and beatings. It may sound like a description of the Abu Ghraib prison scandal in Iraq. Instead, it's an alleged account of life inside the Stafford Township Police Department headquarters and the Stafford Township municipal building as offered in a lawsuit filed with the New Jersey Superior Court in Atlantic County on Nov. 3."
"Parker is also known to have committed numerous cruelties to animals by intentionally killing a large number of small animals on duty with a township police vehicle; by purposely baiting the animals with broken eggs on the roadway and returning a short time later to run them over when they came out of the woods to feed, after which Parker would take 'trophy' pictures of the animals to show to co-workers; Parker is also known to shoot deer grazing on the side of the roadways with his duty weapon from the window of a Township police vehicle while on duty; plaintiff also witnessed Parker, along with another officer, place a wounded live bird in the microwave oven in the police department kitchen and cook the bird in the oven, again with no adverse consequences."
SHAME ON YOU:
All of the following agencies have been notifed of the existence of the meth lab neighboring the military family: local Lacey Twp. Police Department; Lacey Twp. Mayor Quinn; Ocean County Prosecutor's Office Special Drug Operations Unit; Ocean County Narcotics Strike Force; Newark DEA Brian; Atlantic City DEA Mark; NJ Attorney General; Senator Chris Connors; NJ Governor's office; NJ FBI Tipline; NJ DEA Tipline. As recently as August 31st, 2011, the Internal Affairs Division in the Ocean County Prosecutor's Office, along with the NJ Governor's office and the NJ Attorney General's office have all been contacted.
The meth lab remains operational
Ocean County Narcotics Strike Force Supervisor Friedman recently contacted the military family and indicated they would be handling the meth lab issue. The INTERNAL AFFAIRS investigation into the level of corruption of the Lacey Township (Forked River, NJ) Police is a separate issue which has NOT yet been addressed!
If YOU have HAD ENOUGH
of political and police corruption across the country
and you want to help, send your donations
(please no cash) to:
Unite For Justice/Mr. Douglas Millar
1570 North Street, Apt. 8
Santa Rosa, CA 95404
OCEAN COUNTY, NJ:
Forked River (Lacey Twp.) Mayor Quinn's Son, Matthew Quinn Killed a Resident on a "Wellness Check"
in Township of Ocean (Waretown) NJ

see the article at:
Twp. of Ocean sued in death of resident


*Hope, Help and Justice has been found through Attorney Daniel J. Carluccio (recently deceased) and a civil lawsuit -- we suggest refiling your lawsuit outside of Ocean County.

NOW... victims and families of victims need to reach out to Crusader for Justice: Attorney Clifford L. Van Syoc of Cherry Hill, NJ at 856-429-6444.

Stafford Township (Manahawkin, NJ) driver who
fatally struck pedestrian has had
license suspended
SEVEN (7) times
Authorities say 25-year-old Robert Kusznikow struck and killed 76-year-old Michael Grosso Jr. of Barnegat and hit a parked car.  Four of the previous suspensions were for driving under the influence of drugs or alcohol.

Kusznikow's father is president of the Stafford Township Council.

In each of the SEVEN suspensions the judge and the prosecutor of each case need to be questioned regarding their decisions and leniency.

Sounds like another case for
Attorney Clifford L. Van Syoc at 856-429-6444 (OUTSIDE OCEAN County)

To each your own punishment
for what YOU should have done but
FAILED TO DO.

YOU will ALL be held ACCOUNTABLE
for whatever role (big or small)
YOU played in the many coverups.

Furthermore...
Corrupt Police Departments are contrary to the public interest and a menace to society. Any intentional delay toward justice by the authorities makes those same authorities partners in the crimes. 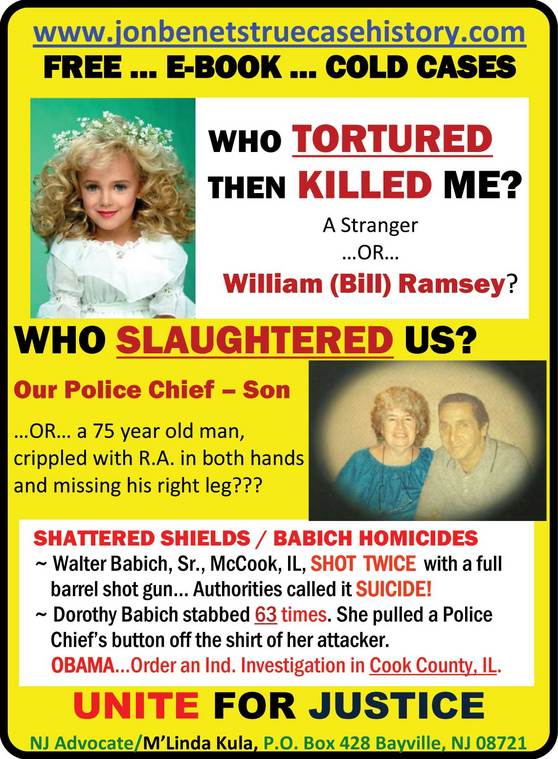 IF YOU NEED HELP IN ANY
MAJOR DRUG RELATED CRIMINAL ACTIVITY:
YOU CONTACT:

As a VERY CONCERNED MOTHER who does not want to lose NOT ONE MORE CHILD, I urge you NOT to take matters into your own hands as a vigilante.
OCEAN COUNTY, NJ
ARRESTED AT SCHOOL
Assistant Principal
held in Drug Bust
Pinelands Regional High School
See the Asbury Park Press, Friday, October 21, 2011, Section B, page B1.